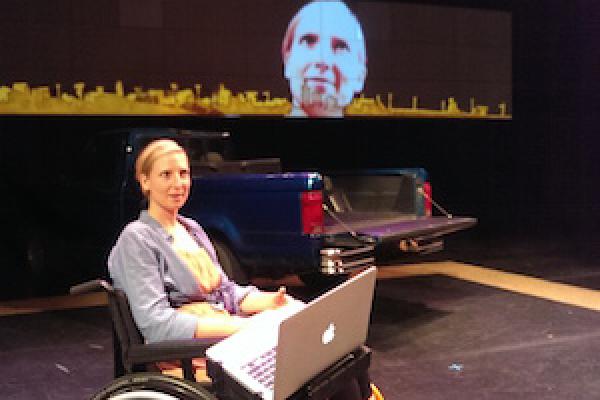 Description
No, ASCTech is not giving away treats to the well-behaved. Instead, ASCTech has partnered with the Ohio State University Department of Theatre on its Good Kids production.
A character, Deidre (left, played by student Linnea Bond), is in a wheelchair and needs to be able to use a computer in several locations on stage, which ASCTech facilitated through a laptop loan.
“The laptop sends video from the laptop's camera to screens in the theatre so that the character’s actions, such as blogging, can be seen. Good Kids was commissioned by the Big Ten Theatre conference and we are the second department to produce it,” said James Knapp, Technology Manager for the Department of Theatre. "The script doesn't call for the laptop and projector but we thought projecting the laptop video would be a great way to highlight a character's action and emphasize how technology has changed our lives."
“ASCTech is pleased to assist the Department of Theatre with this production,” said said Ian Anderson, manager of ASCTech’s service desk. "I was glad that Jim thought of including us even though it doesn’t fall under our normal scope of services.”

Good Kids director Mandy Fox describes the innovation enabled by the ASCTech-Theatre partnership: "From the very early on, I had an image of Deirdre live blogging from her laptop/camera outfit rigged to her wheelchair. Alex Oliszewski [the media designer] and I had lots of early conversations about this and about "hacker" technology. I wanted her to look like she was capable of cracking open her computer, soldering some stuff, and finding her way into the dark recesses of the internet."

Good Kids runs October 21 to November 1 in the Roy Bowen Theatre (Drake Performance and Event Center). Ticketing and other information is available at http://theatre.osu.edu/events/good-kids
Share on Social Media